The Chakras
Affirmation to Application 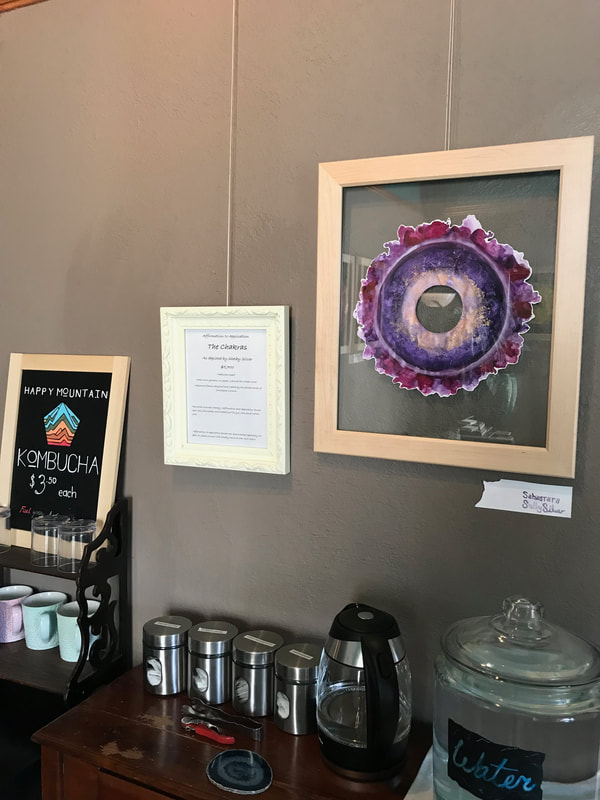 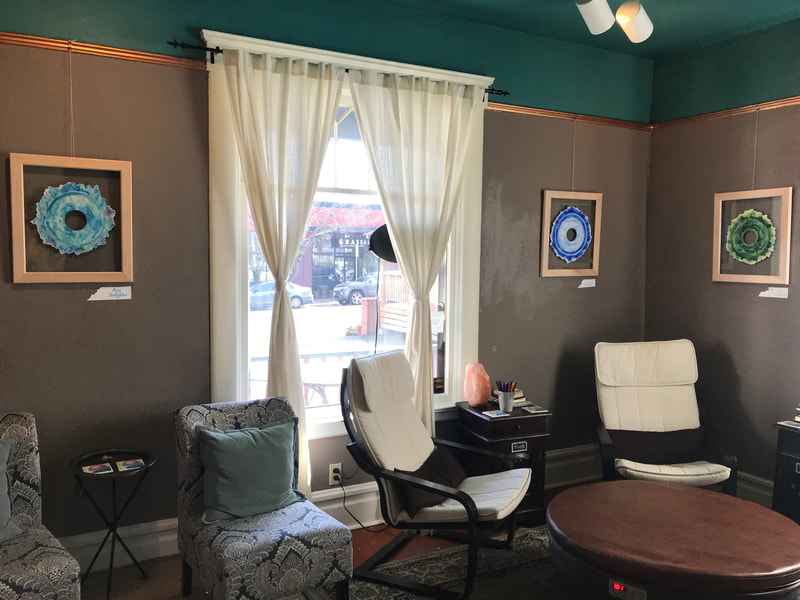 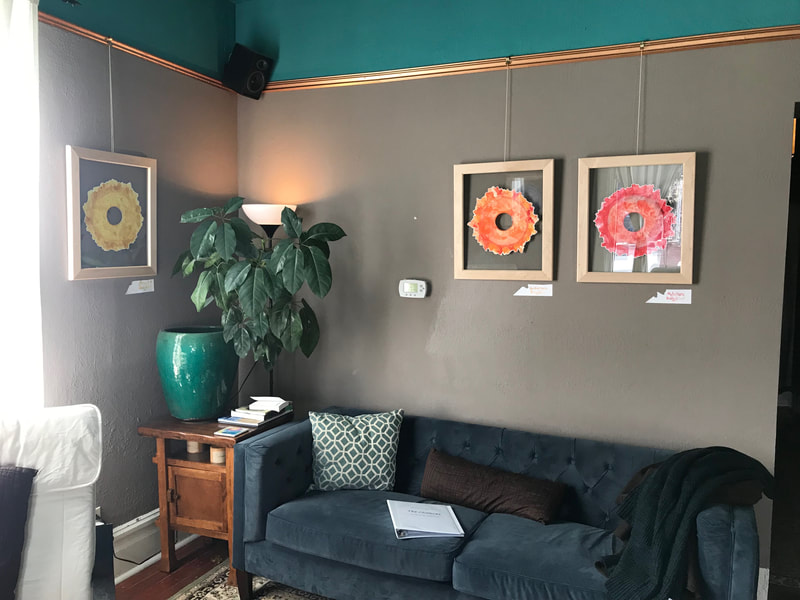 1515 NW 23rd Ave, Portland, OR 97210
thefloatshoppe.com
As I began my journey at the Float Shoppe I never could have anticipated what would eventually come from my experience. Now over a year later and having floated nearly a dozen times I am in true awe at the internal growth I have seen within myself and the abundant, and beneficial healing qualities a float can deliver.

When I had originally planned to create a body of work based on my experience of floating, I was uncertain as to how I would even go about conveying what was happening for me. The movement I felt within each unique and very different session was profound. And yet overtime it came to me, naturally and organically unfolding.  My realization suddenly became clear that due to the intense breakthroughs I was having I would only be able to do a session once a month, to once every two months in order for me to fully process what I was uncovering within myself. This being said my main reason for applying to become an artist in residence with the Float Shoppe was because I wanted to create a more well-rounded therapeutic experience for healing the past traumas in my life. In addition to regular visits with my therapist, and the use of meditation I would then float in a sensory deprivation tank imbued with color and over a thousand pounds of salt.

After coming to learn that particular emotions would become activated and heightened during a float, I was starting to understand more deeply that this floating thing was serving largely as a method of release, and I was not very good at allowing that to happen. I strongly felt that each float was asking something of me. And after my third I felt I had finally heard what it was I was being asked.  I was being gently and sweetly asked to release, rest and let go of literally everything I had been so tightly holding onto in my mind, and in my body.

What did it mean to exist in this spaciousness of complete trust, an atmosphere largely unknown to me? Living with tension in all areas of my body from injury, and post traumatic stress from emotional, verbal and sexual abuse. I had never known of a place where I could go and feel I could release and relax my entire body, by releasing and relaxing my mind. Even in meditation I could not reach the same depth of release and total freedom in weightlessness of gravity.
The tank I had first selected had colored bulbs which I could change according to the color I was feeling most drawn to at the time. It was because of this experience I decided I would like to centralize my focus around the Chakras, Sanskrit for wheel. In essence seven stacked wheels representing our Subtle Body or our Spiritual Body.

​     Each independent of one another and still divinely connected through energetic channels known as Nadi. A Chakra designated to each place of major power within our vessel beginning at the crown of our heads traveling downwards until reaching the base of our spines. The dualities of color, weightlessness and a temperature matching that of my body gave me the ability to shed the pain of my physical form and thus allowing my mind to peel away at the convoluted layers seemingly waiting just below the surface.

With each float session, an invitation to let go, I would learn more about who I am. I would learn about the strength and courage that it took for me to make the decision to show up for myself. A decision made whole heartedly in love and honor of my own health and well-being. Keeping open to receive the hidden messages my spirit body longed to relay, a task which at times felt the most challenging. Feeling my spiritual energies compromised and out of tune from unknowing compensation, finding balance felt more than necessary. It felt essential to my soul’s nourishment, and the greater enrichment of my life should I desire full freedom from the confines of my natural human conditioning, and deep traumatic distress.

​     Floating has gifted me many great and wonderful additions to accompany my healing journey, some of which I’ve listed below. This is by no means a complete list, yet a growing one as more are consistently revealing themselves to me as I continue to float.


Some of the benefits I have received from floating: Through my Spirit Body’s experience in floating I have developed the Chakra Series that I am so blessed to present to you today. I hope you enjoy and remain open to the possibilities that lay before you within the power of releasing, relaxing and letting go. 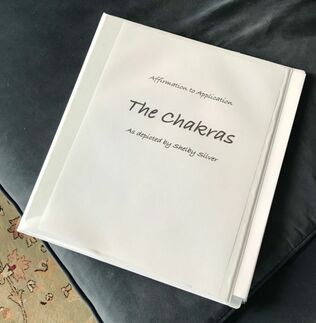 The chakras within our subtle body field are more than just functional purpose serving elements of our make up, they are actually a way to tap into our innate ability to self-heal. I wanted my series to share the power of language reform in cohesion with the healing properties of the chakras, yet in a simple and comprehensive way. It is easy to become muddled up in all of the many and amazing ways one can describe each Chakra and its function. However, the importance of allowing an intuitive process to gestate and then reveal itself through the birth of our consciousness is so vital in our ability to comprehend our own experience, and then to take it a step further into knowingness. Which is why I have decided to create an Affirmation for each Chakra, based on my own deeply personal experience with each them, and how I interpret their function and interaction with my spirit body.

It’s the equivalent of taping over the old inner dialogue tape that has been playing for years. Often times this goes with-out recognition, or acknowledgement and yet this very tape which has initially recorded all of our held beliefs, also holds our pains. Emotional hurts and aches we quite possibly have unknowingly pushed aside over the years with-out real thought as to what addressing them may look like. The tape continues to play, and yet no longer resonates the way it did a year ago, three years ago, at birth perhaps? And we continue to operate with the same understanding. This can sometimes be futile in our efforts to change and grow, when a block such as this, invisibly yet powerfully stands in our way.

When we reform our inner-dialogue by recording over our first tape something really amazing happens to our minds. A positive shift occurs as we evaluate what beliefs are actually ours, or are someone else’s that have stuck with us. For example, we can ask ourselves, is this belief I hold true? And if not, release it and re-record a belief that is true in place of the old one.  A simple and practical way in which we can begin this process of unraveling what is no longer emotionally and mentally serving us is through the use of affirmations. Through affirming our innate goodness, and beliefs which are actually true and serving us appropriately, we apply/play this new tape to/in our daily lives, and like a soothing balm to our once wounded Spirit Body we begin to heal. We begin to release, relax, and let go.