So there you are . . . walking on the beach enjoying your cuppa, hoping to spot a sand dollar, or spy some beach glass, when you begin noticing bits of something you've not put eyes on before.

A brightly colored triangular shape about an inch in a half wide and thin-ish. You pick it up and to your surprise it's light weight, and then recall an article you read a while ago, or remember a video a friend sent you on facebook.

And then it clicks, this is a plastic shard washed up from the ocean. Your eyes linger on the piece with sting for what this really means, and then they fall again to the sand you now recognize as being smattered with these tiny pieces of plastic. Your heart drops because now, and quite abruptly you feel that this problem is bigger than you are. I assure you it is not.

As fragments of plastic riddle our oceans at every depth.
Some small, and some much larger, though to the unified ocean as a whole it doesn't take much to seem like a fragment, or to feel small and powerless standing before it.

The sizes range and yet the danger remains the same.
From millions of plastic water bottles and caps, shards of aged and broken down sun weathered plastic objects of all sorts which continue to get smaller and never fully biodegrade to fishing nets and rope known now as Ghost Net

Though we may feel small and powerless each and every piece picked up and collected does make a difference. And here's how. . .

Marine birds and animals swimming under the sea depend upon the ocean for their primary source of food and  nutrients often mistake the P.M.D. for it. Wether it be ingestion, entrapment, or entanglement the animal suffers and more than likely will die. This is a horrible fate to endure, but what is worse perhaps is knowing that we can make a difference and idly standing by. I couldn't do it, and after sharing this with you, I'm sure you can't either.

The Dalai Llama once said "Just as ripples spread out when a single pebble is dropped into water, the actions of individuals can have far-reaching effects."

You matter,
your choices matter,
and what you do
certainly matters.

There are many ways to become involved with helping to heal the ocean and creating safer marine habitats, and beaches.

One way is to look into how you can locally become involved. As we become aware as individuals those around us also become aware. It is likely that if you live near a beach there is some kind of collection activity that occurs yearly, or optimally on a weekly basis.

You can also begin collecting on your own and counting the pieces is a great way to learn more about how a small amount of time you've spent collecting can yield a lot of P.M.D.

​A great example is a class a taught in May titled the Ripple Effect. A class size of seven including myself spent only 45 minutes on a beach here in Oregon and together we collected over 3,740 pieces of plastic marine debris. This was an inspiring and moving experience. 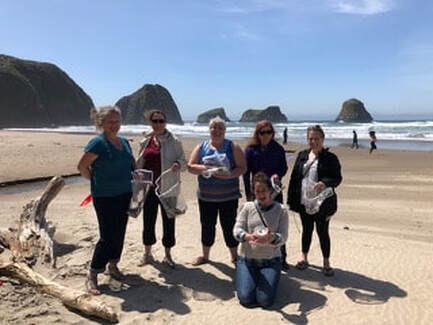 For some collection will be easier than for others, as not all of us live near the beach. However you can still make a difference by supporting those who are already collecting.

​Coming Soon: Beach safety tips for collecting PMD, additional ways to get involved, and other stewards to support, because helping one is helping all!